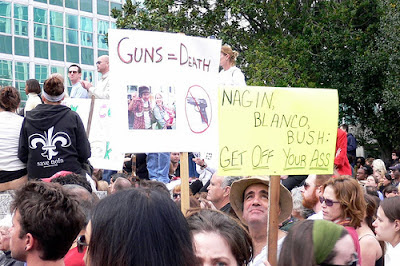 While Puerto Rico's murder and general crime rate is through the roof, there are places even more violent, including here on the U.S. mainland. For example, the City of New Orleans in Louisiana.

And to make matters worst, in the first 8 days of 2007, 9 people have been murdered in New Orleans. Needless to say, New Orleanians are even angrier at the incompetence of Mayor Nagin, police and other officials to carry out the most basic function of government: public safety.

Yesterday, the people took to the streets in protest to express their outrage and to condemn the do nothing leaders.

Officials in both Puerto Rico and New Orleans attribute their respective murders rates escalating drug trafficking and related crimes. It's also probably not a coincidence that both are tourist destinations for the well-off; enforce a caste system on the masses; and are communities being deeply impacted by migration and the global economic shifts.
at 2:26 PM