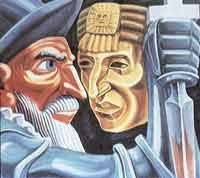 That's the question Philip B. Corbett, the deputy news editor who is also in charge of The Times’s style manual, set out to answer. The reason? Reporters at the NYTimes -- and at every other media outlet in the United States -- are routinely tripped up when it comes to categorizing those of us who trace our roots to peoples and points South of the 13 British American colonies.

So it's Mr Corbett's job to set some editorial rules -- a thankless task.

To be fair, Corbett does offer some helpful guidance such as respecting the preferences of the people you're labeling (e.g., use Sonia Sotomayor's preferred "Latina"). But then he confuses matters with this piece of advice: I think we have to say she would be the first Hispanic justice, despite her own use of Latina.

Latinos, of course, have our own views on what constitutes proper usage. Regretably, opinions are as varied and diverse as are the Americas--and tainted by class, race, national heritage, gender and, of course, migration history.

My preference is "Americano". Yup! Americano...both as a show of solidarity with my brothers and sisters of Latin American heritage, and as an acknowledgement of our geographic and Indigenous roots. For me, it's a political statement--a la Ruben Blades--about who are the Americans (Americanos) and who are the interlopers.

Unfortunately, Americano is often associated with Gringos. For example, I recently heard a Spanish language talk show host repeatedly refer to U.S. Latinos at "Hispanos" and nonLatinos as "Americanos". Of course, the host was simply mimicking what many Whites in the U.S. -- led by White nationalists -- promote: that there are AMERICANS (people of European heritage) and others (Latinos, Blacks, Asians, Indians, Arabs, etc.)

With all due respect to those who prefer its use, but I despise the term Hispanic. Why? For three reasons:

1) It's a relic of a colonial period and its residue: the colonial mentality.
2) While there are Hispanics in the US and across the Americas, people genetically and culturally linked wholly to Spain, most Latin Americans have as much in common with Spain as South Africans have with Britain. While South Africa was a British colony, and some South Africans are of full or mixed British heritage, no one advocates tagging all South Africans as Anglos.
3) And as comedian Bill Santiago says, Hispanic includes the word PANIC and it sounds too much like Titanic, Satanic, Mechanic -- your're sinking, you're damned, you're getting ripped off.

Instead, I use LATINO generally to mean those of us of Latin American heritage in the USA. For me, Latino is not a language-based classification, but one defined by a shared political, economic and social experience. Therefore, Puerto Ricans in the Bronx, Mexicans in Chicago, Dominicans in Manhattan, Colombians in Providence, Ecuadorians in Queens, etc., are Latino. So are migrants from Brazil, Haiti, the English-speaking Caribbean area nations; and the peoples of the annexed Mexican territories.