Martinez Wins Against the Will of Bigots 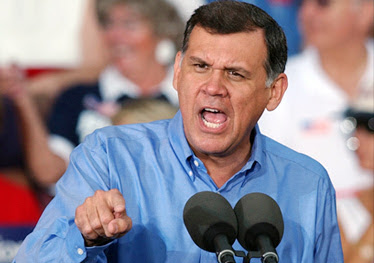 Ignoring the demands of the "Blackboots" wing of the party, the Republican National Committee went ahead today voted to make Senator Mel Martinez General Chairman.

The vote is historic in that it's the first time a Latino has become the leader of a major American political party.

(Ron Brown was the first African American party leader when he was elected Chairman of the Democratic Party just prior to the 1988 national election.)

Unfortunately, in the run up to today's vote a not so quite campaign was undertaken to defeat Martinez. Rooted in a fierce anti-Latino bigotry, opponents went so far as to set-up an anti-Martinez website (StopMartinez.Com)and peppered GOP and conservative websites with all sorts of alleged Martinez sins, including: being a former Democrat, supporting Senator John McCain's immigration reforms, and being Cuban American heritage.

Clearly, wiser heads prevailed and now the party, which lost big time this past November due in no small measure to its harsh anti-immigrant rhetoric, can begin figuring out a wiser path.

However, the bigots will not simply disappear. If anything, they're likely to double up efforts to undermine Chairman Martinez, McCain, Giuliani and any other Republicans with constructive positions on issues such as immigration and equal opportunity.

Here's what one very displeased anti-Martinez activist had to say in response to the vote:

Wonder when he will give his first lecture on 'diversity', 'multiculturism', etc. and call us all bigots and racists.

To move forward, the GOP should take this historic opportunity to boot bigots from its ranks. The GOP may see itself as a big tent party, but it should not be so big that it shelters all sorts of bigots and racists.

With the ascension of Senator Mel Martinez, and the rise of moderates such as Rudy Giuliani and John McCain, the GOP should return to its Abraham Lincoln roots and rid the GOP house of its bigoted rodents.

This move is essential because if the race card is used to deny Barack Obama the Democratic Party nomination, the GOP will want to create a pathway for African American voters to crossover and vote for the GOP ticket. Denouncing bigotry and expelling racists such as Tom Tancredo and the Buchanans is a must.
at 8:51 PM