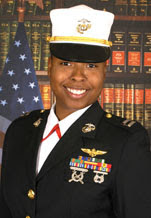 First, this forum was so much better than that travesty in Washington DC last August--even without the big leaguers. The speeches were somewhat contained, the questions were quite good and Tavis kept the whole thing flowing nicely.

However, the set is still somewhat amateurish and the acoustics were not great--which probably is why a number of the candidates had to ask for repeats on questions. And it's pathetic that it took almost a half hour before the panel of journalists were introduced.

The fact that the four leading GOP candidates were no shows was the theme for the first third of the forum. Not only was the dissing mentioned repeatedly by the speakers, but the podiums of the missing were purposely left vacant. Additionally, the first question had to go with why some chose to skip the event.

Huckabee--who received 48% of the African American in his race for governor of Arkansas--actually said that he was embarrassed by the GOPers dissing of the forum.

Brownback said that he's disgusted by the dissing and said, "I'm sorry."

Alan Keyes--who thinks the world revolves around him--said that the leading GOPers aren't necessarily dissing all African Americans--it's just that they're afraid of debating him. Sorry Keyes, but I don't think so.

But who helped their cause and who didn't? Who won and who got burned?

Clearly, the biggest losers, at least with African Americans--and maybe PBS watchers in general, were the no shows. Writing off African Americans may seem like the expedient thing to do but it's wrong, as well as dumb. Huckabee, Brownback, Hunter, et al, should be commended for respecting African Americans enough to show up.

Vernice Amour was a winner. She's the first African American female combat pilot who has done two tours in Iraq. She was in the audience and was acknowledged by panelist Juan Williams. A+

Mike Huckabee - I thought Gov. Mike Huckabee did the best job of conveying a command of the issues, demonstrating experience and competence and in establishing a rapport with the forum's target audience. The only awkward moment was when he tried to explain the weightiness of sending death row convicts to their deaths. A

Sam Brownback - The senator from Kansas was also impressive in his knowledge, legislative leadership and commitment to issues such as integration. He also said he's for an official U.S. government apology for slavery. B

Ron Paul - Congressman and leading libertarian Ron Paul hammered two issues: opposition to the Iraq War and his strong support for freedom as the best hope for eliminating racial and economic disparities. Paul received some of the most enthusiatic audience responses. To his credit, Paul reversed himself based on the evidence and now opposes a federal death penalty. B-

Duncan Hunter - Hunter made his three points repeatedly: He wants to leave Iraqi with "honor", he's for a long border wall, and he did legal work in the "barrio". Hunter is for the death penalty only, he says, because it's a deterrent. Say what? C-

Tank - Tank-credo may have gained a small amount of ground with African American voters by blaming Latino immigrants for depressing wages. But he lost it all when he said he's for the death penalty. D