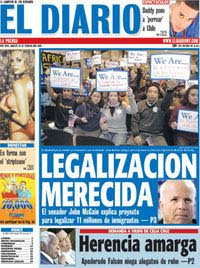 The 150 Spanish language newspapers published in the United States today are the most ever, right?

Furthermore, records show that between 1813 and 1937 some 431 Latino newspapers were published in communities across the U.S., nearly all in Spanish.

Of course, the presence of Latinos and a whole Latino press are inconvenient truths to the preferred myth of anti-Latino bigots that we are latecomers.