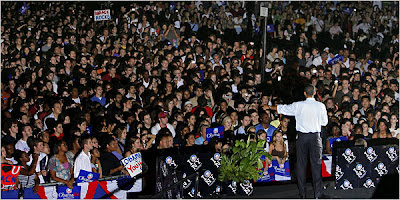 All of the pundits, including Newt Gingrich--and even George W. Bush, have Hillary as the nominee of the Democrats in next years national elections--and today's polls do support their views.

However, while Hillary may very well be winning the votes of the establishment, Obama continues to inspire a new generation of voters.

Check it out! The Obama Army has now grown to an unheard of 345,973. These are not just people that say they support Obama, but folks that have demonstrated it by making a record 492,033 donations.

Incredibly, Obama has received more individual donations totaling more money than any of his Democratic or Republican competitors. (Hillary is 2nd and Rudy 3rd.) What does that say about America's desire for change from the status quo?

What's awesome is that the Obama folks are running what has to be the most sophisticated and interesting online and grassroots campaign ever. For example, Obama yesterday spoke to 25,000 voters packed into Manhattan's Washington Square Park in Greenwich Village. But check out the pre- and post-event videos. They're informative, inspiring, even humorous, and stunningly effective.

Related: NYC Rally Trailer
Obama08 Video of NYC Rally
Obama Distances Himself From Clinton, on Her Turf (includes video of Obama's speech)
at 11:25 AM