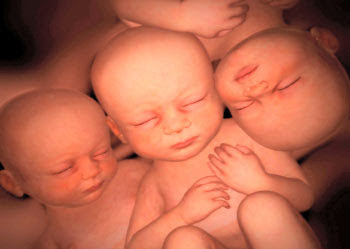 Shhhh. Don't tell Tommy Tancredo or Ms. Heather (Mac Donald) that these babies are Latino because they'll be forced to screech and carry on about how it'll doom the America that they know.

But not to worry--the babies are British. Tommy and Ms. Heather are O.K. with that. I mean, after all, the world could use more upstanding Brits, right? It's just too bad that they don't do grapes or windows--and cooking, well, that's not their strong suit. Good people though those Brits.

Funny thing is when I try to imagine how a Tommy or a Ms. Heather think and talk, I assume a very infantile "I'm the center-of-the world" sort of persona. You know, a place where temper tantrums and pouting are common, and where the Ninja Turtles fight off the bad guys and save the world. Really.

Seriously, Isn't this a truly amazing photograph? It's from an article on a new 4-D scan technology that allows doctors to see the smallest details of life as it develops in the uterus. Truly breathtaking photos.