Signaling the regions of the country the major political parties see as prime electoral territories, the Democrats today announced the selection of Denver, Colorado, the unofficial capital of the quickly changing Mountain West, as the site of their '08 convention. Republicans picked Minneapolis, Minnesota as their convention city.

The selection of these cities makes a great deal of sense politically. Here's why:

Going into the 2008 cycle, Democrats have a solid Northeast and Pacific West base in their favor, along with a traditionally Democrat leaning Midwest. With recent successes in the Mountain West, the Democrats are now sensing a major opportunity to finally break the region wide open. They just picked up a Senate seat in Montana; Ken Salazar beat Pete Coors a few years ago in Colorado, and the fast-growing states of Nevada and Arizona have become increasingly receptive to Democrats. 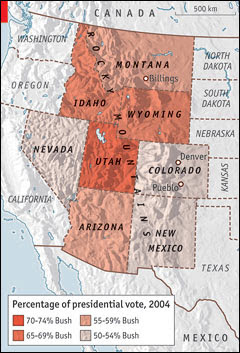 Since the Democratic nominee is expected be from the Northeast or the Midwest, it makes political sense that the VP be a prominent politician from the now open Mountain West. The candidates are: Arizona Governor Janet Napolitano; New Mexico Governor Bill Richardson; and Colorado U.S. Senator Ken Salazar.

It is my opinion that Senator Ken Salazar will be given major consideration for these reasons:

1) His family has deep roots in the region and he comes from a family that knows how to win there.
2) Salazar is a fresher face than Richardson and has less baggage.
3) Colorado is electorally more important than Richardson's New Mexico.
4) Salazar is a former state attorney general.
4) Salazar has proven that he can appeal to Latins and nonLatinos alike; whereas Richardson has only won in a small heavily Latino state.
5) In 2008, the Spanish surname Salazar will carry better with Latinos everywhere than will Richardson.
6) Finally, all of the candidates know that Richardson wants to be president. That well-known ambition may be another reason why Salazar's star may rise.

The Democrat's attention to the Mountain West may also signal that the party may not contest in the Old South. Winning solidly in the Northeast, Pacific West, the mid Atlantic, splitting the Midwest and now the Mountain west would be enough to win.

The Republicans choice of Minneapolis means that they intend to finally convert a chunk of the Midwest/Upper Central regions to the Republican column. In the past two national cycles, the Republicans appeared to be making headway there only to fall tantalizingly close. This time with their convention in Minneapolis, and someone from the region possibly on the ticket, they could finally achieve a major breakthrough.

As a former Democrat mayor of Minneapolis, and a person of Jewish heritage, Norm Coleman could help the Republican ticket appeal to traditionally nonRepublican constituencies. John Thune could be chosen because of his youth, solid Republican credentials and because he earned big points by defeating pesky Majority Leader Tom Daschel.

While there's amble research showing that voters do not decide their presidential vote based on the vice presidential nominee, the '08 election could be the exception to the rule. If winning the Mountain West for the Democrats and the Midwest for the Republicans becomes as hugely important as it's starting to appear, who the number 2 could make all of the difference.
at 3:25 PM