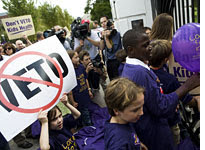 The Children’s Health Insurance Program (CHIP) provides health coverage for 6 million of America's disadvantaged children. The modest program's costs are shared by the federal governments and the participating states.

Recently, the U.S. Congress overwhelmingly approved a re authorization of the program with an expansion in an effort to reach more of the estimated 9 million still uninsured children--most of which are members of working class families. That is, American families that make too much for government Medicaid and too little to afford private health coverage.

The legislation was sent to the White House for the President's approval and signature. Instead, President Bush vetoed it--putting the program in jeopardy and denying millions of uninsured children health coverage.

We don't have money to insure children but we have plenty for misguided wars. We have already wasted $458,000,000,000 in Iraq--and President Bush has just sent Congress a bill for another $42,000,000,000. An enterprise which most people agree is really dumb war and wasteful. For example, the government's own accounting office reports billions in war funds are missing or stolen.

According to The National Priorities Project, half of the funds spent in Iraq thus far would pay for health coverage for all of America's children. That's right! All of America's 80,000,000+ children. Just a fraction of the war budget would cover all 15 million uninsured children targeted by CHIP.

Is it me or does this government have the most backwards of priorities?