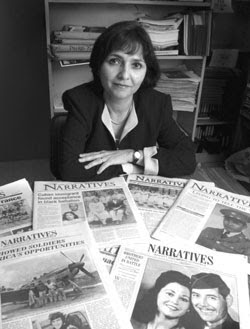 Unbelievably, it's been uphill fight.

Dr. Rivas-Rodriquez has been given lip service by Ken Burns and the empty suits at PBS regarding the inclusion of the Latino experience and contributions in The War, but little action.

Thankfully, Dr. Rivas-Rodriquez has worked diligently since 1999 to collect the stories of the nation's quickly diminishing WWII veterans. She's captured and preserved their stories in A Legacy Greater Than Words: Stories of U.S. Latinos and Latinas of the WWII Generation. (See the write-up below)

Dr. Rivas-Rodriquez will NOT allow Latino veterans to be written out of the historical record of WWII.

Dr. Rivas-Rodriquez has taken her cause national. She founded Defend The Honor, an online campaign to get the word out about the disgraceful actions of Ken Burns and PBS. And this week, in the nation's capitol, Dr. Rivas-Rodriquez convened a meeting of leaders concerned about the disrespectful actions of PBS and Ken Burns towards Latinos and Latino WWII veterans. The group committed to a number of actions which will unfold over the next months and years.

In the interim, sign this petition letting PBS and its affiliates know that you support the Defend The Honor campaign to include the rich history of Latino service during WWII in Ken Burn’s documentary, The War. 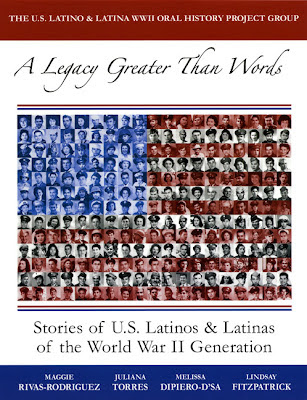 A Legacy Greater Than Words: Stories of U.S. Latinos and Latinas of the WWII Generation(by Maggie Rivas-Rodriguez, University of Texas Austin - May 1, 2006)

Since 1999, the U.S. Latino & Latina WWII Oral History Project at the University of Texas at Austin has captured the untold stories of this WWII generation. Altogether, the project videotaped more than five hundred interviews throughout the country and in Puerto Rico and Mexico.

This volume features summaries of the interviews and photographs of the individuals. Among the people included are Mexican American civil rights leaders such as Pete Tijerina and Albert Armendariz of the Mexican American Legal Defense and Educational Fund (MALDEF) and Virgilio Roel of the League of United Latin American Citizens (LULAC). Others are community leaders such as Pete and Elena Gallego of Alpine, Texas, and military leaders such as Colonel Hank Cervantes and flying ace Richard Candelaria. Women who served in the military are also included. There are academic trailblazers, too, such as Frank Bonilla, who became a major figure in Puerto Rican studies. And there are a few Latinos who describe serving in segregated "colored" units during the war, as their physical features placed them in African American communities.

Overall, the vast majority of the men and women interviewed in A Legacy Greater Than Words led private lives, and their stories chronicle the everyday existence of Latinos in the 1930s and 1940s—stories that generally have been omitted from historical accounts of either the Great Depression or World War II.