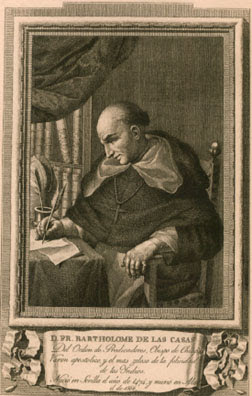 Bartolomé de las Casas, a Spanish colonist, a priest, founder of a Utopian community and first Bishop of Chiapas, was a scholar, historian and 16th century human rights advocate. Las Casas has been called the Father of anti-imperialism and anti-racism. Others take a more guarded or modest view of his achievements. What there is little or no dispute about is that Las Casas was an early and energetic advocate and activist for the rights of native peoples.

Las Casas came to the Indies early, he knew Columbus and was the editor of the Admiral's journal. He knew conditions in the Americas first hand. As the reading in our packet indicates, he was present during Spanish genocidal attacks on the native population of Cuba.

After coming to the realization that the Spanish treatment of the native population was unconscionable, Las Casas became a Dominican priest, and began travelling back and forth accross the Atlantic. He was in part responsible for the repeal of the laws which allowed the Indians to be used in what amounted to slave labor gangs. This was the econmienda system. Government officials were willing to go along with this attempt to end the system for they feared that a new class of feudal lords would arise in the colonies. The Spanish colonists were outraged at this interference. Las Casas attempted to set up a colony on the coast of Venezuala where the native people would be treated properly. It failed largely because of the bad example set by the colony's neighbors.

Because of preassures from the colonists, the encomienda system was restored. Las Casas returned to Spain and was eventually able to bring about the great debate of 1550 in the Spanish capital of Valladolid between Las Casas and the advocate for the colonists Juan Gines de Sepulveda. The excerpt in our packet is from Las Casas' account of the debate.

The advocates of the encomienda system eventually triumphed. When the government realized that it might lose Peru to colonists revolting over this issue, it gave in. Still, Las Casas is a shining example of resistance to the ill treatment of native peoples. His works were translated accross Europe. He likely influenced the French essayist Montaigne's views about the new world.

1484 Born in Seville to Pedro de Las Casas, a small merchant wealthy enough to send his son to learn Latin in the academy at the cathedral of Seville in 1497. Many older sources give 1474 as the year of his birth.

1502 Leaves Spain for Hispaniola in the West Indies with the governor, Nicolas de Ovando. He earns an encomienda for his participation in several expeditions and then proceeds to evangelize the Indians.

1506 Returns briefly to Europe where he is ordained a deacon in Rome.

1511 On August 15, Pentecost Sunday, listens to a sermon by a Dominican priest, Father Antonio de Montesinos on the text "I am a voice crying in the wilderness," denouncing Spain's treatment of the Indians. As a result Las Casas returns his Indian serfs to the governor and the rest of his life is to be spent in defense of the Indian.

1512 Becomes first priest to be ordained in the New World.

1513 Takes part in the violent and bloody conquest of Cuba and receives Indian serfs for his efforts.

1515 Returns to Spain to plead the Indian cause before King Ferdinand. With the support of the archbishop of Toledo, Francisco Jimenez de Cisneros, is named priest-procurator of the Indies.

1516 In November returns to America as a member of a commission sent to investigate the treatment of the Indians.

1520 Presents a defense of the Indian to King Charles I (Emperor Charles V) arguing that the time of military conquest of the Indians has passed and that they could be converted by more peaceful means. After much debate the king sides with Las Casas and supports his plan to build a colony of farm communities in present-day Venezuela inhabited by both Spanish and free Indians. Las Casas sets sail in December.

1522 In January, after more than a year of continuous opposition of local encomenderos who incite Indian attacks on the farmers, the experiment fails.

1523 Disappointed in the results of his political activities, Las Casas joins the Dominicans in Santo Domingo and focuses his energy on writing. Over the next several years he will write several works including the treatise "Concerning the Only Way of Drawing All Peoples to the True Religion" and the beginnings of both Apologetica historia de las Indias and Historia de Las Indies.

1530 Returned to Spain and obtained a royal decree prohibiting the enforcement of slavery in Peru which he delivered personally.

1537 Receives some support from the Pope in the form of Paul III's bull Sublimis Deus which declared the American Indians as rational beings with souls and that their lives and property should be protected.

1542 Returns to Spain where he convinced Charles I to signs the "New Laws" which prohibited Indian slavery and attempted to put an end to the endomienda system by limiting ownership of serfs to a single generation. Writes his most influential and best known work, "A brief report on the Destruction of the Indians," which horrifies the court.

1544 To ensure enforcement of the laws he is named bishop of Chiapas in Guatemala and sets sail in July. Upon arrival meets immediate opposition. He declares in his tract Confesionario that any Spaniard who refuse to release his Indians is to be denied absolution. Many members of his clergy refuse to follow this order. A year later the inheritance limitation is rescinded by Charles V.

1547 Returns to Spain and gives up his episcopal dignity. Becomes an influential figure at court and at the Council of the Indies. Begins conflict with Juan Gines de Sepulveda who defends Spain's treatment of the Indians on Aristotelian principles.

1550 At the order of Charles I meets Sepulveda in the famous debate at the Council of Valladolid. While Las Casas convinced the theologians who presided over the debate and received official approval it was Sepulveda's teachings which largely prevailed in the Indies.

1552 Without clearance from the Inquisition, publishes The Destruction of the Indies. Spends the next fourteen years writing and appearing at court and councils in defense of the Indians.

1566 Dies in Madrid and buried in the convent chapel of Our Lady of Atocha.

Brief Account of the Devastation of the Indies by Bartolomé de las Casas (1542)
How Columbus Day Harms American Indians (by Glenn Morris, Indian Country Today - 10.4.07
at 7:12 AM