The Philly Debate: The Boys Grow Up and Hillary Stumbles 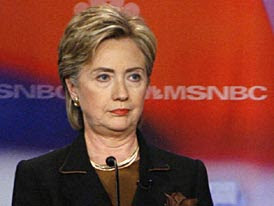 1) Hillary's male competitors finally stopped their silly game of not engaging her for fear of being viewed as mean. (Of course, their deference to Madam Hillary did not protect them from being pummelled by the Clinton War Machine and their media allies.)

2) Tim Russert and Brian Williams put away the sexist approach to Hillary and actually asked her tough questions.

This was welcomed progress. 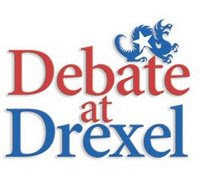 The result was that Hillary, the Democratic Party front runner and likely nominee, was challenged on a number of important points which are sure to become major issues during the next year's general election. Hillary stumbled on all three.

Hillary's official position on Social Security is that it should not be touched, but privately she has said that payroll tax should be expanded. When asked by Russert to resolve those conflicting views, Hillary herself dug a deeper hole. She said something to the effect that while it's her position that nothing should change, a number of proposed changes will be on the table. What?

Licenses for the Undocumented

This was perhaps the most disturbing response of the night. When asked whether Hillary supported or opposed New York Governor Elliot Spitzer's plan to give undocumented workers drivers licenses, she punted.

What was strange was that the question seemed to take Hillary by surprise. But how could it? After all, Hillary is a senator from New York and it's New York's governor--and Clinton political ally/supporter--who's proposal was being discussed. Either Hillary is so accustomed to the MSM's white glove treatment and expected Russert to not question her non response, or her debate preparation was lacking.

Clinton camp knows that the Republicans plan to use immigration as a wedge against the Democrat nominee, so they want to neutralize it as much as possible. Their strategy is to say little publicly on immigration, while conducting a below the radar outreach to Latinos. The latter explains the recent spate of softball interviews by Latino bloggers.

The question I have is not for Hillary...she and Bill are pretty good at the game of slicing, dicing and parsing in order to win political elections.

The question I have is for all of the Latino politicians, nonprofit CEOs and bloggers that have thrown themselves onto Hillary bandwagon: Do you really want a president who is publicly mute on these most important of issues?