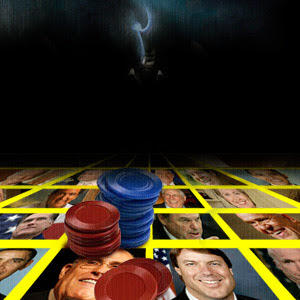 American young people are taught to believe that the United States is a democracy--a government by and for the people, but few of us ever experience such empowerment.

As adults, most of us come to know--even if only in our gut--that there's a huge disconnect between what we were taught in civics and how things really work in America.

We register, we listen to the candidates and we vote, but it still feels like a sham.

We can't quite put on finger on it, but we all sort of know that our will--the people's will--is not what decides the selection of candidates nor how we're governed.

Simple politics dictates that he who buys/selects the candidates wins the spoils of victory. In others words, the American public is screwed--politically speaking, that is.

But how can that be in a democracy such as ours? Can it be that the world's "leading democracy" is not as much of a democracy as we've been led to believe? Yes!

In The presidential primary scam, Salon's Michael Scherer cuts through the fog to expose "Why the game is rigged, and why true democracy is only a secondary factor in the nation's rush to nominate the next president".

(FYI: University of Virginia's Sabato, who proposes changing the constitution to fix the problem in his new book, "A More Perfect Constitution.")