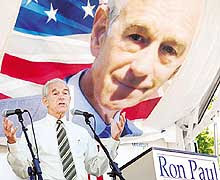 Ron Paul's antidote to "anti-Constitutional interventionism" is as follows:

A Paul administration would see Americans engaged overseas like never before, in business and cultural activities. But a Paul administration would never attempt to export democracy or other values at the barrel of a gun, as we have seen over and over again that this is a counterproductive approach that actually leads the United States to be resented and more isolated in the world.

On this essential issue, Paul makes no sense to W, most in Congress (Republicans and Democrats), most in MSM, all of rightwing radio/cable, but he does to me.