Turning off Younger Voters, Too 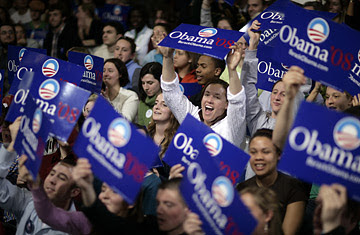 Latinos will not vote Republican next year.

However, the group of voters likely to make the longest lasting and loudest impact on next year's presidential elections are young, independent-minded Americans. That is, eligible voters under 40. Many of whom are fed-up with a baby boom generation of political and business leaders--Republican and Democrat--that has screwed up so much of what it has touched.

With some 90 million srong, representing almost one third of all Americans, Americans 18-40 will shape national politics for years to come.

Here's what one young voter, a person whose online moniker is Shadow and calls himself an independent, wrote in response to Expect less Mr. Nice Guy, an article by Roger Simon on today's Politico:

Most of the progressive blogosphere is against Hillary; they prefer candidates like Obama and Edwards, and think Hillary's cackle is ridiculous.

Rush Limbaugh caused his own problem by opening his mouth and saying something way more offensive than what moveon said; over 70% of the troops gave to an anti-war candidate in the second quarter, so Rush called the vast majority of our armed forces phonies, as opposed to one person.

The fact that the people who went on and on about moveon's ad aren't bothered by Rush shows an incredible hypocrisy to most voters.

Maybe you guys don't realize what you sound like to younger independents like myself. Your entire vocabulary seems to be based on saying words like lefty, socialist, and libs; it seems like you guys can't even carry a conversation without those words, and the posts are ALL the same. That might seem normal to you guys who ingest a regular cycle of far right-wing media where these terms are repeated constantly, but to the other 70% of America, you guys sound NUTS, and you can't honestly think you're winning anyone new over with that language.

The problem seems to be that you guys are stuck in the 60's and 70's, when a Democratic President started an ill-advised war; however, now it's 2007, and we have an ill-fated war started by a Republican President, the biggest national debt in world history, the biggest government in world history, and a foreign policy that increases terrorist recruitment and decreases national security.

All the issues that Republicans are supposed to be useful on - fiscal responsibility, small government, national defense - have come under assault by the modern GOP like they never have since our nation's inception.

So to anyone under 40, relying your arguments entirely words like libs, left wing, and socialist just makes you sound like fringe nutballs; all you're doing is preaching to an increasingly shrinking choir, which will die of old age within a couple generations if no new voters come into the tent.

While I don't know how the nation will fare under the influence of younger voters, one things is clear: They can hardly do worse.
at 1:19 PM