Why The Right May Prefer a Hillary Victory in '08 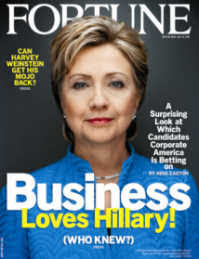 In response to Hillary's Strategy: Winning While Being Disliked, a reader wrote:

Hillary can win the nomination, but NOT the general election. As bad as the GOP is right now, she's the only candidate who will unite the GOP, and bring both Republicans & Independents out in full force against her.

Obama will not unite the GOP the same way Hillary will, which is why he is the best candidate right now to win the nomination, and he's polling better head to head against all the Republicans.

Below is my response:

What I wrote in Hillary's Strategy: Winning While Being Disliked is that in defiance of conventional wisdom, Hillary and her camp are seeking to win despite that fact that an unprecedented number of people don't like her. And not what I'd like to see happen.

I too believe Obama would make the less polarizing Democratic nominee and would even be in a position to take a chunk of moderate Republicans fed-up with the heavy-handiness and stridency of the rightwingers.

However, I'm not sure that it's a guarantee that the GOP can get itself together in the face of a possible Hillary presidency. That's the CW right now, but where will Republicans, Independents and conservatives be a year from now? I think there's a good chance for them to be irretrievably split. Already the radical right has threatened no support to McCain, Rudy, Hagel and now Brownback.

It seems to me that the stage is set for archconservatives to throw a tantrum and walk out-or sit out--'08. That crowd is so full of themselves these days that I wouldn't be surprised if privately they wouldn't prefer 4 years of Hillary (which they'd assume would be disastrous). They'd regroup and strike back hard with a bonafide true believer in 2012.

The model for that strategy?

The rightwing refused to support moderate Gerald Ford's campaign after beating Ronald Reagan for the '76 nomination. Ford and liberal Nelson Rockefeller was the aided in his defeat to a little known peanut farmer from Georgia. Carter's presidency (as opposed to a moderate Republican administration) was the perfect set-up for the rightwing's blowout victories of '80 and '84.

My point? While Republicans would hate a Hillary (or any Democratic) victory, archconservatives may very well prefer it if one of their own fails to become the Republican nomination next year.

Preparing for Hillary, The Conservative Voice - 5.11.06

Dobson and Viguerie Won't Vote For Giuliani, Either, Stranger In A Foreign Land - 5.21.07

Conservatives would bolt GOP over Rudy, The Politico - 6.12.07