Immigration Reform in '07 is Dead 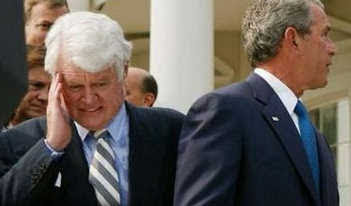 C-SPAN is showing that the senate's immigration proposal was defeated 46-53. It's quite a devastating defeat for the proposal's proponents: President Bush, Majority Leader Harry Reid and senators John McCain, Ted Kennedy and Lindsey Graham. This vote pretty much ensures that immigration will not happen this year.

The outcome is not unexpected since the compromise proposal had just enough to antagonize just about every interest group: labor, nativists, minority groups, businesses, etc. Also, last year's proposal died a similar death.

What's interesting about this vote is how many senators broke ranks with their parties. Twelve Republicans voted yea; while 13 Democrats voted nay. See the list below.

It appears that of the 12 Republicans in favor of cloture, as many as 11 of them have done so at some political risk. On-the-other hand, I count only one Democrat (Harkin) who may get some flack for his vote.

As a political matter, it was incumbent on the Republican side to deliver more than just 12 votes--especially since it was pitched as something the leader of their party--President Bush--said it was important to his legacy. They failed.

At the end of the day, this vote clarifies two things:

1) That when Democrats put up conservatives in order to win, they'll get people who'll join ranks with their ideological brethren in the GOP in voting down certain progressive measures.

2) And Republicans have made it amply clear that they have little respect for President Bush's professed priorities.