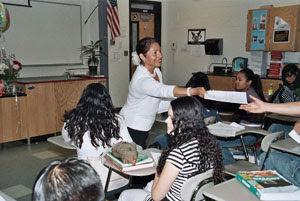 American Taíno readers know that Suffolk County New York is known for its ugly strain of anti-Latino immigrants. Suffolk is where an immigrant family was burned out of their home; where Steve Levy ordered troopers to evict immigrant workers from their homes in the dead of winter; and the legislature considered making it illegal for Latinos to stand on public sidewalks.

However, in the midst of this harassment life goes on. The truth is that Latino immigrants are truly a hardy bunch. There's not much that xenophobic suburbanites can do to dissuade them from pursuing their dreams. Consider this story by Kate Maier entitled Learning English and Much More: Non-native speakers discover a family atmosphere in the E.S.L. classroom (The East Hampton Star - 6.21.07).

At first glance it's a story about students and their teachers in a tony part of Long Island. But it's really about Latino immigrants leaping over barriers, grabbing hold of their American dreams, and the teachers who guide them.

There's Jorge Gomez who arrived 4 years ago from Ecuador, mastered English and earned a Regents diploma. He's now set to begin classes at the Island Drafting and Technical Institute in Amityville.

Priscila Benenaula, a junior also from Ecuador, didn’t know a word of English when she enrolled at East Hampton High School in May of 2005. A month later, she took Regents exams in global studies and math — and passed them both. She's now editor of the bilingual student magazine and earned a trip to Albany to learn about government.

Johana Carmona arrived from Colombia when she was 15 years old. She's now a graduate of Suffolk Community College, works as an office assistant at her former high school and is taking courses at SUNY Stony Brook.

And then there's biology teacher Dr. Lilian Ramzy who was a medical doctor in El Salvador before immigrating to the United States. Her first year at the East Hampton High School, the bilingual biology class had a 100-percent passing rate on the Regents.

And then there are the nonLatino teachers who are examples of our better selves. Billy Dickson teaches mathematics but his other job is building the immigrant students' sense of belonging. Connie Randolph, head of the school's ESL program, expresses admiration for her teachers and fondness for the students. And there's Eva Iacono whose classroom is a haven for immigrant students as they prepare for American lives beyond high school.
at 10:40 PM