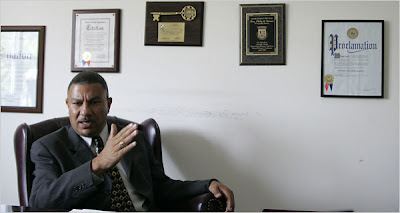 The NYTimes did a nice write-up on Phil Ramos, Suffolk County's minority member of the NYS Assembly.

A single father of twin girls and former police officer, Ramos is the only politician willing to stand-up to Steve Levy and his nativist politics.

“It’s about trying to do the right thing even if it is unpopular at first,” says Mr. Ramos, who keeps a crucifix and a rosary on his desk to remind him of his grandfather’s words.

True leaders are not defined by the number of photo ops and press releases they churn out, but what they do when times are tough or the issue is unpopular.

Ramos taking on Suffolk's leading bully, Ramos is demonstrating that he is a true leader.

Read: A L.I. Assemblyman Learns to Work the System (by Robin Finn, NYTimes - 6.29.07)
Is Levy Getting His Comeuppance? series on American Taíno.
at 8:28 AM