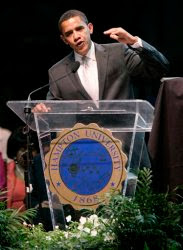 Democratic presidential hopeful Barack Obama said Tuesday that the Bush administration has done nothing to defuse a "quiet riot" among blacks that threatens to erupt just as riots in Los Angeles did 15 years ago.

The first-term Illinois senator said that with black people from New Orleans and the Gulf Coast still displaced 20 months after Hurricane Katrina, frustration and resentments are building explosively as they did before the 1992 riots.

"This administration was colorblind in its incompetence," Obama said at a conference of black clergy, "but the poverty and the hopelessness was there long before the hurricane.

"All the hurricane did was to pull the curtain back for all the world to see," he said.

Obama's criticism of Bush prompted ovation after ovation from the nearly 8,000 people gathered in Hampton University's Convocation Center, particularly when he denounced the Iraq war and noted that he had opposed it from the outset.