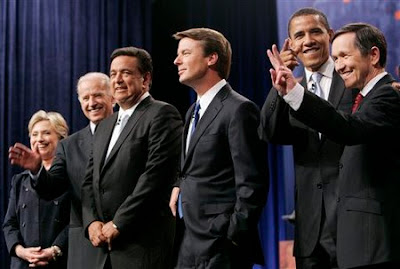 I'm honored to join a distinguished and diverse panel of bloggers in covering tomorrow night's presidential debate at Howard University.

Not only do I get a front row seat to history in the making, but I also get to blog about it onsite.

I'm hoping that all of America tunes in for the All-American Presidential Forum on PBS moderated by Tavis Smiley.

The blogger coverage of the debate is coordinated by Media Bloggers Association. Click here for a listing of the invited bloggers--and for an aggregation of their commentaries.

Very nice of Smiley to recognize the young people from Memphis who paid for their trip to DC by washing cars. Governor Deval Patrick got a bit of face time for his future run for national office. He's one Massachusetts politician that can go places.

We're 26 minutes into the debate and we've only had one question--and that question illicited what sounded like bits from the standard stump speeches.

Such an important topic--education, but it's too broad a question. The candidates are saying they for education and for all sorts of programs. Although I do like that Gravel and Kucinch drew the linkage between the squandering of billions on a bad war and the need to invest in quality education for the nation's children.

I also think that Obama's point that we need to see the country's poor children as our children as a necessary ingredient towards improving educational results is a good one.

I honestly don't know what Hillary offered because she seemed to scream her response.

They're all for health care for everybody, but it was the question on HIV that got the most attention--and laughter.

Biden just said that he spent last summer in the Blaaaack sections of town educating Blaaaack men that it's OK to wear condoms. Really?

Then Biden further embarrassed himself by saying that he and Obama got checked for AIDS.

That revelation prompted Obama to interject that it was he and Michelle (and, I guess, not Obama and Biden) and that they did so as part of a mission to Africa. Very funny.

Does Biden know how silly he sounds?

Hillary: Those with the most must contribute to this country. OK.

Richardson: Give incentives to those companies that invest in the inner city.

Ouch! Smiley just cut-off Richardson and told him he was finished.

That's it! Next question.

Smiley is trying to speed things up and these already over hyped candidates now seem like they're on speed.

Dodd wants to end the disparity between between crack cocaine and powder cocaine. Hmmm. Hey, Hillary is for that, too. Biden wrote the drug court legislation and he's introduced legislation to also deal with crack and powder. Richardson somehow squeezed having people join unions.

The question has to do with whether the candidates support a federal law guaranteeing the return of displaced residents? Yes.

This is a hugely important topic: what to do about the people displaced by Katrina? But the candidates just do not have time to give thoughtful answers. Edwards and Obama are for giving the people of New Orleans a role in the rebuilding of the City--as opposed to giving fat contracts to the Bechtel and Haliburtons. OK, interesting idea.

Hillary just mentioned her initiative in NY to create jobs--especially in Upstate NY. She didn't however mention that that initiative has done zippo. Upstate has fewer jobs now than it had before she ran for senate. I'm not trying to pick on he. It's just that I happen to know the facts in this specific instance. Lost of promise, no results.

Kucinch: Cancel NAFTA and the WTO.

We're at the last question?

Dodd: US ought to act.

Hillary: No fly zone over the Sudan. Shoot down their planes.

Obama: Trade and invest in Africa.

Wow, the pacing of the debate was all off.

I liked that the forum lacked the stiff formality typical of most televised debates/forums. Warmth and friendliness are good things. But the pacing was all wrong. Very unfortunate.

In terms of the questions or issues discussed, that was somewhat disappointing as well. I felt that the question were too general--prompting very general responses.

However, most inexcusable was that the questioners failed to ask about the major issues of the day: the War in Iraq, immigration reform and climate change. Why?

In terms of the candidates, we learned very little new about them and their positions--other than that Gravel is a bit of a loony tune. Probably a nice guy, but a loony tune.

I don't think anybody won because the format was so bad. Actually, Obama is the winner because he seemed comfortable, didn't yell, didn't insult anybody, looked in command, knew what he was talking about, mentioned his wife and offered a moment of levity.

The children from Memphis.

Tavis Smiley and whomever was directing the debate coverage for failing to properly manage the flow of the forum.
at 5:22 PM