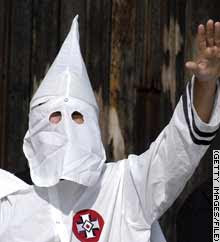 The end of a legitimate discussion of immigration policy and the full blown expression of bigotry and racism against newcomers seems to come very fast in America.

Much of what I read and hear these days on immigration sounds to my ears--and they're the ears of the son of a Latino migrant worker--to be plain old American racism.

Q: If much of the rhetoric surrounding immigration is not racist, then why is it that the Klu Klux Klan and other organized racist groups are feeding off of it?

This is what a new report by the ADL documents: The Klan, and other white supremacist groups like skinheads and neo-Nazis, grew significantly more active in the past year, holding more rallies, distributing leaflets and increasing their presence on the Internet -- much of it focused on stirring anti-immigrant sentiment, according to the report.

Here's a link to the AP story Klan growing, fed by anti-immigrant feelings.
at 9:29 AM