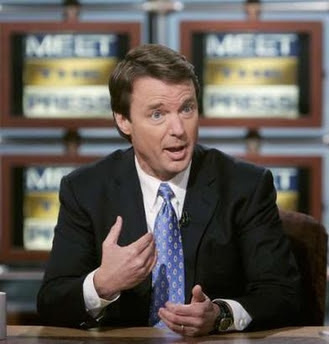 Americans have all sorts of reasons for changing their minds on the Iraq War.

Some people believe they were lied to about the actual level of danger posed by the Saddam regime.

While still others have realized that they simply don't have the stomach for war.

However, few can match former John Edwards for originality. He claimed in an interview this weekend on Meet the Press that he went from 'War Hawk' to pacifist after his wife's bout with breast cancer.

I do want to believe Mr. Edwards on this. After all, all sorts of conversions happen when people are faced with their own, or a loved one's, mortality. And certainly no decent person would ever use a loved one's experience with cancer for political gain, right?

But watching Edwards search as he answered Tim Russert's question made me think that there was more than a bit of political calculation at play.

TIM RUSSERT: If you knew today, and you do know, there is—there are no weapons of mass destruction in Iraq, would you still vote to go to war with Iraq?

JOHN EDWARDS: I would have voted for the resolution, knowing what I know today, because it was the right thing to do to give the president the authority to confront Saddam Hussein.

I think Saddam Hussein was a very serious threat. I stand by that, and that’s why we stand behind our vote on the resolution.

TIM RUSSERT: That’s a year and a half into the war.

JOHN EDWARDS: Mm-hmm. Perfect—that’s a very fair question. I can tell you what happened with me, personally. We got through—I was—at that point, I was in the middle of a very intense campaign, one that I thought was very important for America. When the campaign was over and the election was over, we had a lot going on in my own family. Elizabeth had been diagnosed with breast cancer, we were taking care of her. And for the first time I had time to really think about, number one, what I was going to spend my time doing, and, number two, my vote for this war. And over time, when I reflected on what I thought was going to be necessary going forward, to have some moral foundation to work on issues like poverty and genocide, things that I care deeply about, I could no longer defend this vote. It was pretty simple. And I got to the place I felt like I had to say it and had to say it publicly. And so—what?--a year—a year or so ago I did that.

Click here for the full John Edwards Meet the Press interview.)
at 1:28 PM