Rudy on a Mission 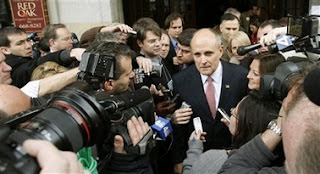 Rudy Giuliani today filed papers with the federal election commission to officially explore a run for the U.S. presidency.

This move puts him on par legally with "exploring" contenders such as McCain, Obama, Edwards and Clinton.

Rudy enters the contest as one of the more formidable contenders. He has broad name recognition; his poll numbers are sky high; and he's viewed as a strong and proven leader. It's not a bad start when you're already viewed as America's Mayor.

But before Rudy was every body's mayor he was the 2 term mayor of some 8 million residents of New York City--as well as of the 2 or so million people that commuted daily into the city from the suburbs. Rudy was my mayor.

Everybody knows that Rudy doesn't fit neatly into any of the conventional boxes in American politics. He's liberal on some issues, conservative on others and just plain Rudy on most. It's this reality that the Mitt Romneys and Hillary Clintons are betting on to knock Rudy out of contention in America's too superficial political process.

What Rudy must be sensing though is that he may be the only candidate out there who offers enough to enough people to win. (Then again, Rudy may again just be willing the stars to aligned in his direction.)

For example, for Americans concerned that Bush has been a poor manager, Rudy is a proven executive with local, national and private sector experience. While he clearly had critics of his style and priorities, there's no doubt that he took a crime-riddled and massively dysfunctional city and made it work again. It was Rudy's two contentious terms that set NYC on the path to historic crime drops and economic prosperity.

For Americans still concerned about the possibility of another terrorist attack, Rudy is perhaps the person with the greatest resolve to defend against the bad guys. Even before 9/11, Rudy may have been the only American politician with his own anti-terrorist and foreign policy. Such Americans will feel protected under a President Giuliani.

Americans looking for a rational solution to the "unmanaged" immigrant worker situation may find Rudy's positions and beliefs to their liking. As a "law and order" man, Rudy would insist on enforcing enforceable laws. As an authentic New Yorker, Rudy would seek policies that embrace our immigrant heritage.

Rudy fits the need for "change," too. He'd be the country's first Italian American president--and that is far larger than many have suggested. He'd also be the first president since perhaps Teddy Roosevelt associated with a big American City--and that's huge, too.

People interested in drama and gossip, Rudy's past, style, habits, friends and enemies will keep the tabloids and the gossip industry happy for a long time.

Rudy is one of those rare individuals with the ability to seemingly bend reality their way. He's done that time and time again. He did it by defeating some of the powerful mob syndicates. He did it again by winning 2 terms as a Republican and then taming a spiralling New York City. And he did it again by reassuring a frightened country during the horror 9/11.

Whether he can do it again and convince enough social conservative Republicans to pick him as their nominee, I don't know. But if there's anybody that can make that impossibility happen, it's Rudy.
at 8:37 PM