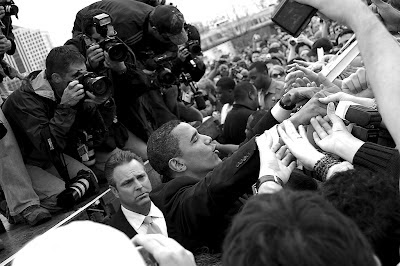 No matter where you stand politically, there's no denying that there's something magical about Senator Barack Obama's run for the U.S. presidency.

Of course, that so many people come out to get a glimpse of him is as much a statement about America as it is about Obama himself.

Americans everywhere want a change and many see the young, articulate and handsome junior senator from Illinois as embodying the most exciting and hopeful change.

To some observers, Obama's run appears to be generating the same type of enthusiams and crowds that Bobby Kennedy received in his all too short campaign.

Anyone that's taken the time to read his books and to listen or read his speeches, knows that Obama is not your ordinary politician. Obama is a thinker--as well as a pretty good reader of the body politic--a rare and powerful combination.

Of course, this doesn't mean that Obamamania will continue unabated. If he's not the real deal, the public will likely figure it out. But so far he's having a pretty good run.

Check out the numbers of people attending campaign events since he announced his candidacy just 2 weeks ago: