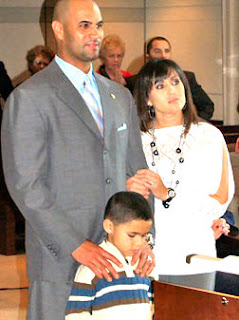 On Wednesday, February 7, 2007 he added U.S. Citizen to his impressive list of achievements.

Joining Pujols for the ceremony at the Tomas F. Eagleton US Courthouse in St. Louis, Missouri was his wife, Deidre, and son, AJ.

Pujols, 27, is a native of the Dominican Republic but has lived in the U.S. since he was 16. He attended high school and junior college in the Kansas City area before being drafted by the Cardinals. He currently makes his home outside of St. Louis.

Email ThisBlogThis!Share to TwitterShare to FacebookShare to Pinterest
Labels: Dominicans, Sports, US Citizenship