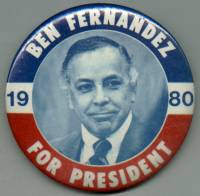 Some believe that Governor Bill Richardson of New Mexico is the first Latino candidate for president, but that's not true.

The first was Benjamin Fernandez who competed for the Republican presidential nomination in 1980. He received 1,000,000 votes but lost to Ronald Reagan. He spent the rest of that political cycle serving as a surrogate speaker for the Gipper. He died on April 25, 2000 at the age of 75.

Here's an excerpt from his biography from the Republican National Hispanic Assembly website:

He was born in a railroad boxcar, and then in one generation, was a self-made millionaire and became a viable candidate for President of the United States. It could only happen in America! He was born in Kansas City, Kansas, and he and seven brothers and sisters worked with their immigrant parents in the sugar beet and tomato fields of Michigan and Indiana.Working from sunup to sundown, the Fernandez family saved every penny so they would not have to go on welfare. It was a hard-working, respectable family, trying to stay together, trying to survive; trying to maintain its dignity and self-respect. They made it.

Fernandez was also the first chairman of the National Hispanic Republican Assembly. His last assignment was as Michigan Hispanic State Chairman for Senator John McCain, January 2000.
at 12:46 AM