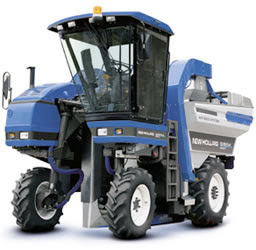 Oregonians for Immigration Reform love the new grape harvester machines but it can do, with a crew of just three, what it used to take 34 migrant workers 1 hour.

Hip, hip, hooray! they're all shouting.

Interesting logic since OIR's embrace of the harvester, according to Andrew Leonard in Grape harvesters of illegal immigration wrath (Salon - 7.21.07) appears to make a lie out of their key anti-immigration plank: that Latin migrant workers are taking jobs from Americans?

But here's the more critical point in Leonard's article--and it's one made vividly clear in Andres Oppenheimer's Saving the Americas: The Dangerous Decline of Latin America…and What the U.S. Must Do:

"Reducing the number of available 'stoop labor' jobs without simultaneously beefing up investments in education and job training and social safety net protections -- not just in the United States, but everywhere -- seems a bit short-sighted.

If technological change really is contributing significantly to growing income inequality then the world is facing much bigger threats than anything posed by 'illegal' labor."