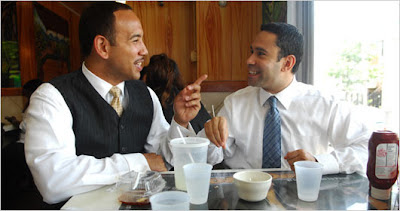 They have been friends for so long that neither can remember their first encounter. When Joel Rivera was born, Ruben Diaz Jr. was about 6 years old. Their fathers have been active in Democratic politics in the Bronx for decades, and the sons have followed in their footsteps: Mr. Diaz winning a seat in the Assembly and Mr. Rivera in the City Council. They play basketball together and have been allies on virtually every political issue.

But they are also two ambitious politicians who are considered the up-and-coming leadership of the Bronx. And their ambitions are leading them to a potential head-to-head competition that could drive a wedge between their prominent families.

Both men want to run for Bronx Borough president.

More of the article.

Question: What becomes of the current Bronx Borough President Adolfo Carrión Jr? Many believe he has his sights set on becoming NYC's next mayor.

While the competent and charismatic Carrión may be just the right person to lead NYC into the next decade, perhaps he should be thinking of Hillary Clinton's U.S. Senate seat if she's successful in her presidential run. The Democratic Party coalescing behind a Carrión senate bid would be just the antidote to the negative tensions created by the foes of immigration reform.