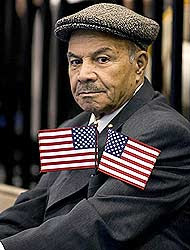 Now what? That is the question that many immigrants in the United States are asking.

The failure to get a comprehensive immigration reform through Congress was seen by millions in the Latino community as a direct attack. The negativity surrounding the debate reverberated throughout the community, affecting not only undocumented immigrants but legal residents as well.

But the issue goes beyond immigration reform. There is a generalized feeling among Latinos that without political participation, their voice is simply lost amid the anti-immigrant rhetoric. If they want respect, if they want elected officials to take notice of issues that concern them, they need to have the power to put them in office or vote them out.

Loosely translated, that means "The time is now," the time to go full-throttle with a campaign to motivate legal permanent residents to become citizens of the United States and to help guide them through the process.

Maria Elena Salinas is anchor of “Noticiero Univision.”
at 9:17 PM

Email ThisBlogThis!Share to TwitterShare to FacebookShare to Pinterest
Labels: Immigrants, US Citizenship