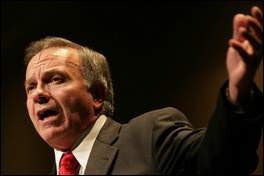 Delighted by their victory in killing immigration reform, Tom Tancredo, Duncan Hunter and supporters online are now calling for rounding up and expelling all undocumented immigrants and their U.S. born children.

Calling it the "last, best hope of Western civilization," Tancredo declared that "its not impossible" to deport all 12 million residents.

A multi-year crackdown on employers combined with tougher border security, he argues, would force most immigrants to return to their native countries willingly.

I would have never guessed it, but Tancredo is now dictating the issues agenda for Republicans and the nation. He almost single-handily kept the immigration issue percolating in the Congress. And it's been his strong anti-immigrant views which have so loudly echoed through right wing media. And its been his relentless pursuit of the issue which has caused so many of his fellow GOP presidential candidates to come out against immigration reform.

I don't recall another single issue candidate that has had a greater impact on policy or on his competitors. Since the right wing has cast aside just about all of the Republicans running for president because they're not right wing enough, it seems to me that they should be given Tancredo much more love. He is their man.

While I disagree with where he's coming and what he proposes, I humbly submit that Tom Tancredo ought to win the GOP nomination. He's clearly a man of principle and of his word. Certainly, the right wing wants to nominate such a person, right?

How is Tancredo NOT electable?

Didn't he lead the charge in slaying the AMNESTY FOR ALIENS dragon? Wasn't he the good guy in the white hat that exposed and brought the evil compact between the RINOs and Ted Kennedy? Isn't he the man who stood resolute against the brown hordes while Washington dilly-dallied? And wasn't he the man whose vision and purpose most closely resonated with the 70% of Americans that the right wing keeps saying was with them on immigration?

So what that the man doesn't have perfect Romney hair or the folksy ways of a Huckabee or a Thompson. Neither did Nixon.

That is, why nominate a phony like the actor Thompson or the cross-dressing Rudy when you can get the real deal. Tancredo must be the GOP's man!

BTW: Given the way Republicans and Democrats folded last week, it'll be interesting to see all of the hand wringing as Tancredo, Buchanan, Duncan and the radio screechers up the ante in an effort to out do themselves.