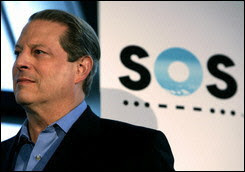 Al Gore's image as a rock-star eco-warrior gets another high-voltage jolt of celebrity endorsement Saturday when the music world gathers to raise awareness for global warming at Live Earth.

But despite a growing clamour for the beaten 2000 presidential election candidate to enter next year's race for the White House, the chances of Gore running for office again remain remote, analysts say.

Breathlessly described by admirers as "the coolest ex-US vice-president ever", Gore has consistently stated he has no interest in launching a 2008 election bid, while stopping short of unequivocally ruling himself out.

"I haven't ruled it out, but I don't think it's likely to happen," Gore said in a recent interview with Time Magazine.

Yet Gore's prominent involvement in events like Live Earth -- which will see over 150 stars perform in eight concerts around the world to urge governments to set climate change targets -- will inevitably breathe new life into calls for a 2008 White House bid.