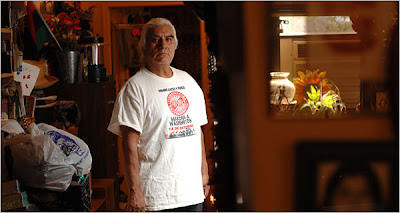 For Victor Toro, last week seemed like any other week in his life as one of the best-known advocates for immigrants and other dispossessed people in New York City. He met with other activists in Rochester to discuss what they should do about the recent collapse of the immigration bill in Congress.

On Friday, his meetings completed, Mr. Toro boarded an Amtrak train to return to his home in the Bronx. But Mr. Toro is an illegal immigrant. And it was on that train that he was discovered. He was arrested, jailed and then released early Monday morning after posting bond.

Yesterday he was home with his wife and daughter, awaiting what is next in his odyssey. It began in the 1970s when he was a political prisoner in the jails of Gen. Augusto Pinochet in Chile, veered for a time into Europe and Mexico, then into New York City, where he became known for more than two decades of community and political activism.

Belatedly, Mr. Toro now plans to seek political asylum, but where he once feared only Chile, he said he now fears the United States as well.