Salsa Spins Beyond Its Roots 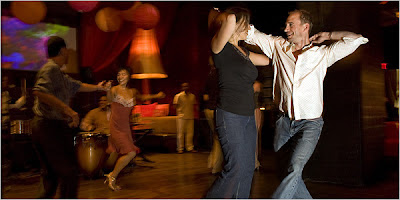 SOON after Héctor Lavoe, the great salsa singer, arrives in New York in the new biopic, “El Cantante,” he finds himself immersed in a vibrant scene in the Bronx: a nightclub crammed with bodies drenched in sweat moving to the pounding beat of congas. As the film, which is to open nationwide Aug. 3 and stars Marc Anthony as Mr. Lavoe, shows, it could have been any night in New York in the late 1960s, when dancing was a genuine physical manifestation of the energy of the streets.

Besides the studios, salsa dancing is also thriving at salsa congresses, several days of workshops and performances that attract thousands of dancers from around the world. The original Salsa Congresso started in Puerto Rico in 1997; there are now congresses held in places as diverse as Los Angeles, Chicago, Britain, Romania, Dubai, Israel and Japan. New York’s annual congress is set for Aug. 30 to Sept. 2 at the Hilton New York.