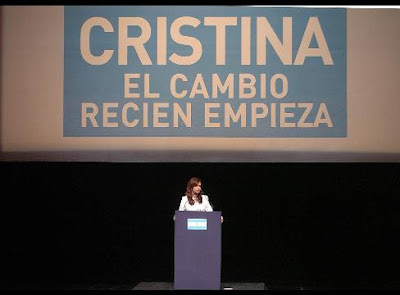 Argentine First Lady and Senator Cristina Fernandez de Kirchner heads into her first day of campaigning for president, pledging to extend the economic agenda of her husband that she said rescued the country.

Fernandez, 54, kicked off her campaign last night before a crowd of 2,000 supporters who watched a video of her featuring U.S. Senator Hillary Clinton, Venezuelan President Hugo Chavez, and the Colombian pop star Shakira. Later, the screen in the La Plata theater displayed her slogan for the Oct. 28 election: ``The Change Has Just Begun.''

Fernandez may not have done Hillary any favors with her video. While I could not find the video on the Internet, I suspect that it'll be a great interest to Hillary's presidential competitors.

Recall that Hillary was heavily criticized for her early "socialistic" health care plan, and more recently, for threatening to have oil companies stripped of their profits. Meanwhile, Chavez has nationalized oil and is pursuing Cuba-like health care system. That a prominent foreign leader such as Fernandez even suggests an association between the two allows Hillary's foes to paint her as a sort of domestic Chavezista (or even a Peronista).