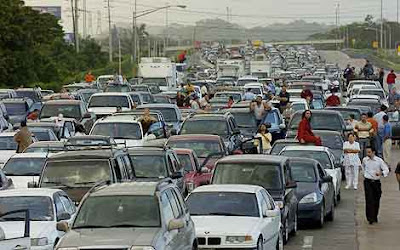 There was a major traffic jam in La Isla of del Encanto yesterday.

A truck overturned de Diego highway in Bayamon and everything came to a dead stop for hours.

Of course, the San Juan Metro area is a major urban center with lots of cars, so traffic jams are inevitable and frequent.

What the photo reminds of, though, is the sense that there really aren't any road rules on the island roads and highways--at least none that I've been able to discern in my many trips there.

Here are a few of the things people do there that drive me nuts:

1) running red lights - This happens alot and when I asked locals why, I was told that it's an accepted practice especially at night and for women. The idea is that if a you wait for the light to change at certain intersections and times of the day, you are more susceptible to carjackings or worse.

However, the fear of carjackings and rapes seems to give many motorists to run red lights anytime there's not a police patrol in sight.

Question: If carjackings and rapes of motorists is causing people to run red lights, shouldn't the PR police come up with strategies that allow for the to re-establishment of public safety on the roads?

2) driving on shoulders - This must be one of the most dangerous and aggravating practices ever. It's routine for drivers stuck in slow traffic to execute pass-bys on the shoulders of highways. Sometimes the perpetrators are those hyper-annoying young duds with the dressed up boom boxes on wheels; but often the violators are average looking Puerto Ricans just doing what's done.

Police are often shoulder drivers there, too. But they often have no choice. I have rarely observed PR drivers voluntarily clearing a lane--even for emergency vehicles. Instead, you're more likely to see ambulances, fire trucks and police cars attempt dangerous maneuvers such as driving at high speeds on grassy medians, sloping shoulders, sidewalks and even off road.

3) driving slow in the fast lane - This is one of the worse practices ever. Without an understand of the rule that slower vehicles stay to the right in order to allow others to pass, you simply have chaos--and that's what you have across PR.

What's worse is that a lot of slower drivers choose to drive in the left or fast lane because the right lanes are usually in disrepair due to the heavy pounding of truck traffic. Highways in PR are typically cement slabs which fall out of alignment with the tropical rains and the pounding of heavy trucks. Sensibly, PR drivers gravitate to the left lanes in order to avoid the constant thumping and misalignments caused by the right lanes.

The problem is that slow trucks use the right lanes and slow cars use the left lane, blocking all other traffic from passing. I've driven on roads where the highway ahead is clear, but I can't get around a slow truck on the right and a slow car on the left, and no matter what you do, blink your lights, blow your horn, the driver won't give you the right-of-way. It's not that they're trying to be annoying, it's that they do not know the concept of right-of-ways.

4) stealing tolls - How often have I seen this? You're edging closer to a toll booth and you hear one, two, three or more sirens go off as brazen drivers race through the tolls without dropping the required 10, 15 or 25 cents into the collection boxes. I've never seen a toll work respond in anyway thus encouraging the practice.

5) toll dummies - This has nothing to do with drivers per se, but it's a feature of the PR highway experience worth mentioning. Most of the tolls are manned by people even though they're coin operated. Their jobs? They take your 15 cents and drop it into the toll box which is in between you and the toll collector. That's there job. It's make work of the worst kind. Not only must it be degrading but the collectors are engulfed in sun-baked auto emissions all day. (Other places use collection dummies and subject them to Chernobyl level toxins--and it's equally stupid there, too.)

6) stopping to chat - Getting around town is tough enough but it's made much more difficult by the number of drivers stopping to chat. May be it's just me, but I've had to wait way too many times behind some dude stopping in the middle of the road to chat with another motorist or persons on the side of the road--usually a young woman. And don't dare ask the dude to move. If you do, you'll probably incite the dude.

7) dead car lights - It gets dark, really dark, in the Caribbean and island highways are rarely lit. So having a full set of operational auto lamps is really important to road safety. But in PR it seems that every second or third car operates with one or more dead lamps. What I think is a motorcycle coming towards me is often a one lamped car. And then there are the hair raising moments when you're driving along and suddenly you're confronted with a car without any lights.

8) what are directionals? - Turning or changing lanes without a signal is a pet peeve of mine and it's a problem where I live--especially among the young dudes that love to play chicken by darting in and out of lanes. But using directionals seems to be optional in PR.

9) who needs road signs and directions? - I have never understood how an island so dependent on visitors could do without clear and accurate road signs. It's either missing at key junctures or it's inaccurate. And forgets maps. They're either outdated or only partially correct.

With missing signs, inaccurate maps, dead ends, construction, etc., asking for directions becomes necessary. But getting clear and accurate directions is a major challenge in PR. Instead of using standard road cues, e.g., the number of street lights, the number of streets, left or right, North, South East or West, actual street names, route numbers or distance measures (miles, yards, etc.), people will refer to the original name of a route, mention landmarks familiar only to the locals and use hand gestures to indicate directions. The funny things is that the people may very well know the way but they can't explain it.

I'm sure there are more PR driving annoyances. I'm curious to learn about any others you readers have experienced. Forward them and I add them to the list.
at 2:39 PM