Colorado & 'The Birds of Killingworth' 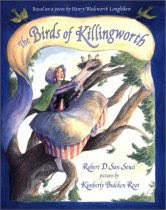 Contrary to the claims of the anti-immigrants of endless prosperity, economic ruin is what awaits towns, states and the nation when immigrant workers are run out.

That's just what's happening in Colorado, a state that has gone the furthest in making it impossible for enterprises to hire immigrant workers. According to The Los Angeles Times in Colorado's immigration policy backfires, the fruits of this policy has been a spike in business costs and a decided downturn in economic activity.

Colorado reminds of the terrible unintended consequences in the childrens story, The Birds of Killingworth, where the farmers tire of the local birds for feeding off their crops. Led by Squire Case, described in Henry Wadsworth Longfellow's poem--the basis for the book, as "a man austere, the instinct of whose nature was to kill," convinced the local farmers they would grow richer if they killed the local birds.

(Note the strikingly similarity in intention and results of the blockheaded anti-immigrant worker prescription promoted by Littleton, Colorado's Tom Tancredo.)

So they did. But instead of seeing the anitipated bounty, the farmers saw their crops and their prospects evaporate due to their simple-minded supidity. Without the birds that were so despised, the insect population--locust, beetles and others--went uncheck and obliterated the crops. The farmers had failed to see that their prosperity and that of the town was connected to the services provided by the birds at a bargain price.

Facing financial ruin, Squire Case admits his grave error in killing off the birds to his daughter.

While Colorado isn't admitting a mistake--classic when in a deep state of denial, they're attempting to solve the problem with remedies which will ensure ruin: raising farm costs and the use of chain gangs for labor. Not only are farmers being forced to raise wages in order to find non-immigrant workers--dramatically increasing consumer costs, but the prisons are sending convicts to help fill the labor void.

The good news is that in The Birds of Killingworth, the leader's daughter, Almira, secretly gathered many of the hatchlings before they could be killed. With the help of Noah, schoolteacher, and the children, Almira protected and nurtured the birds.

When the farmers grew desperate, Almira was able to bring forth the birds to once again perform their essential and economical service to Killingworth.

Like the people of Killingworth, Coloradans--and Americans--need to witness the results of Tancredo's inspired stupidity as it runs its course in Colorado. Perhaps only then will Colorado see the essential value of immigrant workers to its history, economy and cultural life.
at 10:29 PM