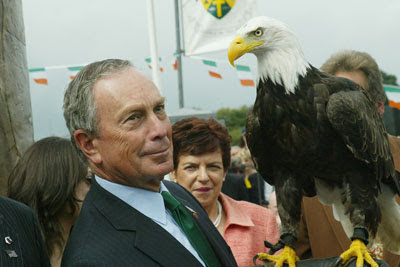 There's yet more buzz about a possible Michael Bloomberg for president--even though he has said he won't decide until next year.

Part of it is that Bloomberg has had some success as mayor of New York City, is term-limited, has endless wealth, and is deeply committed to public service.

Waiting until next year to decide means either he is:

Here are three scenarios that could sweep Bloomberg into the upper reaches of American political power:

If the parties go knee-jerk and nominate ideologues with questionable executive ability, a third party Bloomberg for president movement would be powerful. While this scenario appears unlikely--you never know what can transpire between now and next year. For all we know, we could have Democrat Dennis Kucinich squaring off against Republican Tom Tancredo. Under that scenario, Bloomberg wouldn't even have to campaign to win.

If the moderate Republicans running falter and the nomination goes to a mainstream conservative candidate, such as a Fred Thompson, a Bloomberg VP would make a contest against the Democrats quite interesting. Some of the typical political and cultural lines of attack used by Democrats against Republicans would be blunted.

Bloomberg as a Democrat? Why not. Bloomberg was a life-long Democrat until '01 when he ran for mayor. Bloomberg maintained his standing as a mainstream liberal.

A Bloomberg as Democrat VP would blunt GOP attacks, too. He would instantly make the Democrats look less partisan. On the issues, a Bloomberg VP would be add gravitas to any ticket and he would help deflect charges of being anti-business, or too soft on national security.

Bloomberg's role on national security would be very interesting. In today's politics, determining whether a politician is strong or weak on national defense is often gauged by views on support for Israel. As a strong defender of Israel, the GOP would have a hard time making the case that the Democrats are unrealiable on national security and the fight against terrorism.

While two New Yorkers on the same ticket has never happended before, a Clinton-Bloomberg ticket could be the sort of breakthrough that could bullet-proof Hillary's quest for the White House.

An Obama-Bloomberg ticket could re-ignite the historic African American-Jewish alliance--a partnership that has frayed over the years. From an alliance for civil rights laws, a victorious Obama and Bloomberg could bring the partnership into the highest reaches of civil governance.

Time will tell whether Michael Bloomberg decides to throw his hat in the ring for national office, but one thing is certain: Michael Bloomberg will be heavily courted by Democrats and Republicans a like. If he doesn't run for president--and he probably won't--the country is still likely to benefit from a Michael Bloomberg, public servant, at the national or international arenas.