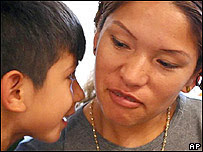 Saul Arellano's mother, Elvira Arellano, has become a symbol for the resistance against the government's barbaric practice of fracturing immigrant families by forcibly arresting and deporting the "undocumented" mothers of children whom are U.S. citizens.

Against American law, the U.S. citizen children of these immigrant mothers are also deported, or--as happened last month in Bedford, MA--the government deports the mothers and leaves the children behind, alone, to fend for themselves.

Last August 2006, Arellano defied an order by ICE to turn herself in for deportation. Instead she sought refuge in Adalberto United Methodist Church where she has lived with her son since under the historic religious practice of Sanctuary.

When government laws and authorities act in inhumane ways, people have historically sought refuge and/or help from religious institutions. There is a long and proud tradition in this country--as well as in others--to defy the immoral and inhumane actions of government from the sanctuary of institutions of faith. Think of the U.S. civil rights movement, the under-ground railroad, the struggle against apartheid, the U.S. sanctuary movement of the 1980s, Poland's Solidarity Movement and Mahatma Gandhi's campaign against British oppression.

What's especially gratifying to see is the leadership role of Chicago's Puerto Rican community. Puerto Ricans are U.S. citizens and could, therefore, simply look the other way--as so many Americans have done. Or they could join in the ugly American tradition of taking free shots at the most recent and beleaguered immigrants. But in Chicago, it's Puerto Ricans--among others--that have formed the human shield necessary against the brutality of the U.S. government.

Visit Puerto Rican Legal and Education Fund's website to learn about how Cesar Perales and his Boricua associates are fighting injustices against immigrants and Latinos.