Told You So...Nativist GOP is a Loser! 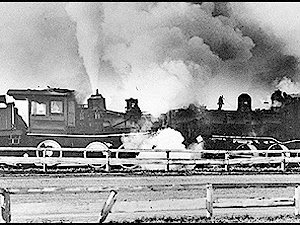 Since this December '06 post, I have been warning the GOP that nativism against Latino immigrants is a political loser -- and they would seal their own fate in '08 if they didn't change course.

Between then and the election a few weeks ago, I wrote over two dozen posts on this very issue. (See links to some below). A train wreck was coming. But the GOP turned deaf.

Of course, they wouldn't listen to a pro-immigration Latino blogger, but they tuned out their own as well. It was like they collectively covered their ears and yelled nah, nah, nah, nah...at the top of their lungs to tune out the warnings of Linda Chavez, Clint Bolick, Mel Martinez, George W. Bush, Wall Street Journal and John McCain and others.

I'm not one to say 'I told you so', but I really did warn them early and often. And I'll tell them again. Nativism may help marginal politicians in loser districts and counties. BUT IT WILL DESTROY ANY POLITICAL PARTY IN AMERICA THAT PURPORTS TO BE MAINSTREAM. Period!

Nativism is both an individual as well as a social illness. And today's GOP has an especially virulent strain. It's an illness which causes its victims to think and behave irrationally, including self-destructing. Unfortunately, the self-destruction is usually proceeded by feverish frenzy to bash those outside the tribe.

The following are a few articles since the election in support of what I've been saying for two years.

Republicans: Fenced In By ImmigrationUntil now, the conventional wisdom has been that illegal immigration is a wedge issue that works to mobilize “the base” in the Republican Party, win over swing voters frustrated with the problem, and hurt Democrats who support comprehensive immigration reform. Conventional wisdom has also held that the number of Latino voters who could hold anti-immigrant politicians accountable for their rhetoric is too small to make a difference outside of Democratic strongholds. This election stands that conventional wisdom on its head.

More Immigration Losers
Immigration wasn't a dominant issue this fall, and other factors contributed more to the GOP defeat. But the political reality is that Republicans who thought that channeling Lou Dobbs would save their seats will soon be ex-Members.

THE GOP & THE HISPANIC VOTER Full throttle on wrong track
Hispanics voted 67 percent for Barack Obama, playing a key role in flipping Colorado, Nevada, New Mexico and Florida to the Democratic column. Even more frightening for Republicans is the strong possibility that Latino voters could soon deliver Texas and Arizona to the Democrats. If this happens, Republicans can turn out the lights on their presidential hopes, lock the door and go on vacation for a decade or three.

Hispanic Panic for the GOPWhat happened? Many blame the debate over comprehensive immigration reform, which produced fierce legislative showdowns in 2006 and 2007. "It was the tone of the debate," says Diaz-Balart. "The tone of some Republicans was offensive to the vast majority of Hispanics." He believes this "had a devastating effect" on the party's standing with Latino voters.

Hispanics will make Texas Democrat-friendly, some say
A major measure that would have given illegal immigrants a path to citizenship failed last year after a revolt from conservatives, who denounced it as an amnesty for lawbreakers. "If they do that again, it's going to be catastrophic for the Republican Party," he said.

Latinos supported Obama with huge majorities
According to an analysis by the Democratic group NDN, Latinos were key to Obama's victory.
Immigration steered Latinos to Obama
The challenge now, he said, is that [George W. Bush and John McCain] who represented the best hope for Republicans to connect with Latino voters on issues that matter to them, particularly immigration, have been spent.