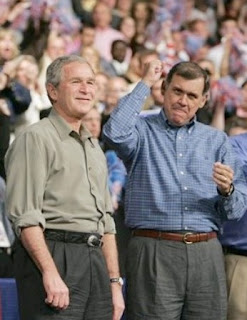 The Hill is reporting that Republican Senator Mel Martinez will NOT run for re-election in Florida in 2010. Caught between Republican nativism, Bush incompetence, and a changing Florida, Martinez has chosen to step aside and not seek re-election.

Actually, I'm not sure Martinez had much of a choice. At this point, he probably couldn't win back the mayor's seat in Orlando. His popularity has taken a major hit for reasons, including:

1) long-standing ties to the very unpopular Bush administration
2) support for immigration reform that made him a target of the GOP nativists
4) an unsuccessful stint last year as Bush's pick to chair the Republican National Committee
5) and Florida's continuing movement from Red to Blue state.

However, Martinez and the GOP were in trouble when Bush felt compelled to install Martinez as RNC chairmen in the aftermath of the massive defeat of the administration's pathetic efforts at immigration reform.

The goal was to reassure Latino Republicans nervous about the direction of the GOP, but it didn't work. The wingnuts led by Tom Tancredo, Rush Limbaugh and Sean Hannity were more emboldened and smelled Latino blood. As I recall, they immediately attacked Martinez, even suggesting that a Latino immigrant should not be their party's leader. (See links to the Martinez posts below.)

Hmmm. A Latino Chairman of the Republican Party promising to create a party in which Latinos as well as African Americans are comfortable is refreshing. Certainly, Bay Buchanan and Tom Tancredo can't be lovin what they’re hearing.

And here's what I wrote just 8 months later when Martinez announced that he would be stepping down as RNC Chairman:

Clearly, Martinez does not want to be associated with a GOP presidential campaign likely to go down in flames in part due to its anti-Latino, anti-immigrant and anti-African American baggage.

There's a GOP train wreck in the making--and Martinez is leaving before it crushes him, too.