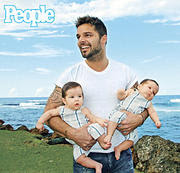 Not to be outdone by Jennifer and Angelina, Ricky went and had his own twins--Matteo and Valentino--via surrogacy. And they're adorable!

As per Hollywood tradition, Ricky's now 4 month old babies are introduced to the world via the cover of People, too. Jennifer and Angelina collected seven figure fees for their work; unclear what was Ricky's take. But that's not what's important, is it? It's really all about the babies--and they're really very cute.

Enrique Martín Morales (aka, Ricky) tells the magazine he's balancing his career while caring for twins himself. What? No nanny for Ricky's little hombres! Hmmmm. Either the next installment of La Vida Loca can be done very quietly from his tropical mansion or his partner--not that I'm saying he has one--is on diaper duty.

One question: What's with the Jacksonesque grasp?
at 7:20 AM