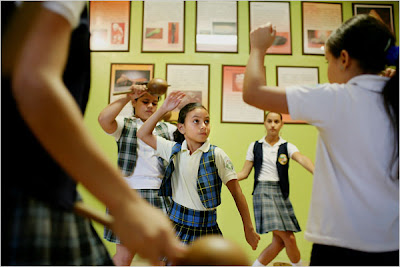 Today's NYTimes includes a story on the National Indigenous Festival of Jayuya, it's pageant, and the growing importance among Puerto Ricans of our Taíno roots. Here's an excerpt of the story as well as a link to the accompanying photo series:

“It’s different,” said Félix González, president of the National Indigenous Festival of Jayuya, of which the pageant is a part. “It’s not white culture and blue eyes; it says that the part of our blood that comes from indigenous culture is just as important.”

Puerto Ricans have long considered themselves a mix of African, European and Native American influences. But since the 1960s, the Taíno — a tribe wiped from the Antilles by European conquest, disease and assimilation — has come to occupy a special place in the island’s cultural hierarchy.

The streets of Old San Juan are lined with museums and research centers dedicated to unearthing Taíno artifacts and rituals. Children are taught from a young age that “hurricane” is Taíno in origin, from the word “huracán,” while no Latin pop music concert is complete without a shout out to Boricuas — those from Borinquen, the Taíno name for Puerto Rico, which means “land of the brave noble lord.”

The ties may be more than cultural. In 2003, Juan Martinez Cruzado, a geneticist at the University of Puerto Rico at Mayagüez, found that at least 61 percent of Puerto Ricans possess remnants of Taíno DNA — and nearly all seem to believe they belong in that group.

“The Indian heritage is very important because it unites the Puerto Rican community,” said Miguel Rodríguez López, an archaeologist with the Center for Advanced Studies of Puerto Rico and the Caribbean, an independent graduate school in San Juan. “There is a feeling that it represents our primary roots.”

He added, “It is our symbolic identity.”