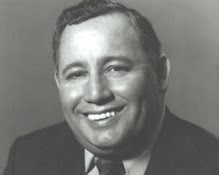 Acknowledging Ramon Vélez' place in the history of Bronx community and political life, Falcón believes that it would be dishonest to obscure the less savory aspects of the man. He has called for a critical assessment of the man many Bronx Latinos knew as Padrino.

In A Second Look at a Bronx Baron’s Methods, NYTimes columnist David González, who hails from the Bronx and later covered Vélez at the pinnacle of power, begins that process.

González -- as does Falcón -- takes a classic progressive lens to Vélez. As such, he sees a bare knuckles politico who used the social welfare system to enrich himself and monopolize local politics. He likens Velez to Tammany Hall's George Washington Plunkitt, a City politico from a century ago who became wealthy by means of what he called "honest graft."

There's an honest graft, and I'm an example of how it works. I might sum up the whole thing by sayin': "I seen my opportunities and I took'em."

But I'm not sure that self-enrichment through "honest graft" is the only issue here. Certainly, it's still a key part of the art of politics as practiced across the City and beyond. For example, Hillary Clinton commodities futures bonanza, Al Sharpton's suits, Charlie Rangel's four rent-controlled apartments, school superintendents with half a million a year pensions, etc.

What bothers González and many others is that Vélez not only enriched himself with funds intended for the poor, but that he flaunted it. Additionally, he succeeded in institutionalizing a corrupt political culture that continues to do great harm to the people of the Bronx.

“These guys wrap themselves in the flag, and then you see even progressive people making excuses for them,” said Angelo Falcón. “But what do they leave behind for the future? I don’t think anybody can say Puerto Rican politics in the Bronx is any kind of model of anything. It’s a mess.”

Velez was a significant player/actor in the Latino history of the Bronx, but to Gonzalez and Falcón, he leaves a troubling legacy. Instead, González points to Evelina Antonetty and Antonia Pantoja as truly worthy examples of Bronx community leaders who made great contributions and built enduring institutions and legacies, but did it without enriching themselves or using tainted politics.

The death of Vélez, the infighting among Bronx Latino pols, combined with the defeat of José Rivera as Bronx Democratic Party Boss, may signal the beginning of the end to Latino 'Patrino' politics.