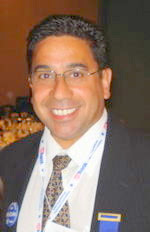 Lawyer James F. Castro-Blanco, 50, has declared his intentions to run for the position of Yonkers City Council President in the '09 municipal elections.

Yonkers with 200,000 residents is tied with Upstate Rochester for third place. However, with twice as many Latinos than Rochester (28k), Yonkers (60k) has no Latino on its City Council. Castro-Blanco hopes to fill that void by presiding as the council's leader. If he wins the GOP's backing, he'll be pitted against one term incumbent Democrat Chuck Schorr Lesnick.

Yonkers is a middle-class city in New York's Westchester County abutting the northern border of the Bronx. It's a city that has had major issues with racial segregation in housing and in its public schools. Accordingly, its politics at the mayoral level has been dominated by Republicans--although the council is now under Democratic control.

Castro-Blanco is a member of the Board of Directors of PALS and of the Yonkers Puerto Rican/Hispanic Day Parade Foundation.