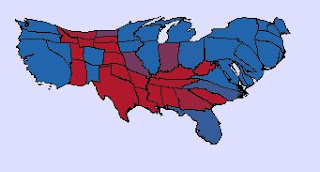 American Taíno has followed this historic presidential election with the belief and hope that America would again chose a leader worthy of the office of the president.

In surveying the early field of candidates it became clear early on that only Barack Obama offered the best chance for such change. A relatively unknown rookie senator from Chicago, Illinois, with a funny name and of biracial heritage, Obama seemed to many an unlikely answer to America's leadership needs.

But by what margin victory? That is, will he squeak by or will he win a mandate for change?

American Taíno predicts that when the last vote is counted tomorrow, Obama-Biden will defeat McCain-Palin 353 electoral votes to 185. In political terms, a landslide.

The next 24 hours will likely be every bit as exciting as the proceeding 2 years.