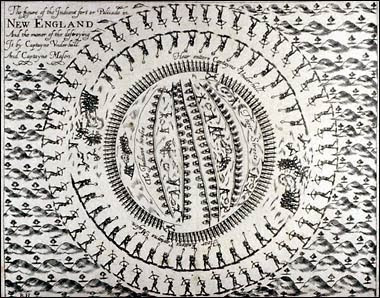 The 1621 feast between the Pilgrims and the Indians was not the first official Thanksgiving. On June 20, 1676, following the massacre of 700-800 Pequot Indians in Connecticut, the council of Charlestown, Massachusetts unanimously voted to proclaim June 29, 1676, as a day of celebration and Thanksgiving. The following statement was read:

"The Holy God having by a long and Continual Series of his Afflictive dispensations in and by the present Warr with the Heathen Natives of this land, written and brought to pass bitter things against his own Covenant people in this wilderness, yet so that we evidently discern that in the midst of his judgments he hath remembered mercy, having remembered his Footstool in the day of his sore displeasure against us for our sins, with many singular Intimations of his Fatherly Compassion, and regard; reserving many of our Towns from Desolation Threatened, and attempted by the Enemy, and giving us especially of late with many of our Confederates many signal Advantages against them, without such Disadvantage to ourselves as formerly we have been sensible of, if it be the Lord's mercy that we are not consumed, It certainly bespeaks our positive Thankfulness, when our Enemies are in any measure disappointed or destroyed; and fearing the Lord should take notice under so many Intimations of his returning mercy, we should be found an Insensible people, as not standing before Him with Thanksgiving, as well as lading him with our Complaints in the time of pressing Afflictions."

THE MASHANTUCKET PEQUOT MUSEUM: The engraving above depicts a stylized view of the assault on the Pequot fort at Mystic. More than 700 Pequot Indians were believed to have been killed during the massacre led by Capt. John Mason in 1637. This engraving was made in 1638.
at 10:38 AM