I joined 1,000 or so of mourners at last night's outdoor vigil for Marcello Lucero in Patchogue, Long Island. 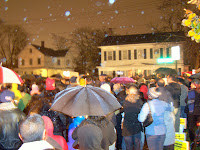 It was a diverse crowd, young and old, Latino and nonLatino. They came from the Latino precincts of the Patchogue area, as well as from communities across the length of Long Island, including Astoria, Jackson Heights, Sunset Park, Corona, Elmont, Hempstead, Long Beach, Glen Cove, Freeport, Amityville, Huntington, Brentwood, Central Islip, Southampton, Montauk. Some travelled from Ne 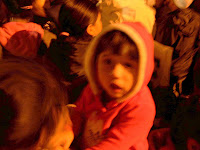 The bulk of those assembled though were Latino immigrants -- most Ecuadorianos.

The vigil was held at the very site of Marcello's murder, on a street along side the Patchogue commuter rail station. It's the back and poorly lit side of the rail station, so one can easily see why the thugs would chose to do their evil work there.

Under a steady drizzle one mourner called 'tears from heaven', the vigil included 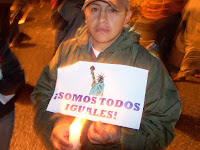 prayers, chants, speeches and songs offered in Spanish, English and sometimes in both. Many in the audience held flickering candles. Many held home-made signs protesting Marcello's murder or demanding an end to hate. A lit shrine with a large photo of Marcello, religious artifacts, messages and flowers drew a wall of bereaved a hundred deep.

Especially touching was that a two other vigils were held simultaneously last night: One in Marcello's hometown in Ecuador and another in Nanuet, New York. The proceedings in Patchogue were heard by Marcello's mother via cellphone. 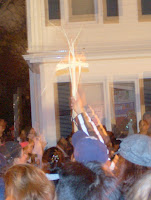 People speaking from the podium included a number of politicians:

- State Senator (and Majority Leader to be) Malcolm Smith of Queens who promised to use the full weight of the state to protect New York's immigrant communities.

- Patchogue Mayor Paul Pontieri who spoke about his family's own immigrant origins in a small town in Italy and how the death of Marcello has wounded the community he loves and has lived in all of his life.

- Assemblyman Phil Ramos condemned the murder of Marcello and the pattern of anti-Latino immigrant violence that has been a shameful part of Suffolk life. He spoke about his expe 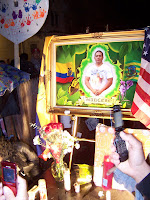 rience as a former Suffolk police officer in which he responded to several horrific acts of racist violence against Latino Immigrants.

There were labor leaders who rallied the crowd with chants of 'Justicia', 'Yes, We Can!' and 'Un Pueblo Unido No Puede Ser Vencido!'.

A number of Latin American nations sent their representatives, including Ecuador's Ambassador to the United Nations, embassy officials from Venezuela, El Salvador and others.

There were religious leaders including the Imam of Long Island's Muslim community who offered prayers and solidarity.

Marcello's younger brother spoke again about the need to stop the violence against immigrants who he described as good people, hardworking people.

Latino and immigrant leaders addressed the mourners, including Dr. Luis Valenzuela who called for Suffolk County politicians to stop bashing immigrants. Another noted that Lucero means 'bright star' in Spanish and that Marcello was shining a light towards a better place from his perch in heaven.

Finally, one very animated speaker--whose name and role I didn't get--opened his comments with 'good morning' even though it was night. It wasn't a mistake. His point was that Long Island's Latino community has been asleep for too long, reluctant to stand up for itself. But that last night's large turn out was a sign to him that the community has awakened.