A Blue Texas? Latinos Will Decide 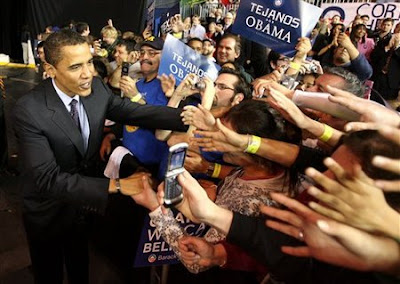 That's the question Michael B. Farrell examines in his terrific article in today's Christian Science Monitor. While he doesn't give an answer, he lays out some of the political and demographic trends shaping the outcome. For example:

Of course, changes in demographics alone will not decide the fate of a 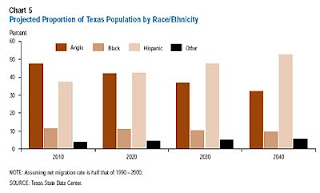 political party. After all, immigrant groups have been known to migrate politically as they solidified their middle class status, and the same thing could happen with Latinos and other populations in Texas. It is, in part, how President G. W. Bush managed to get 46% of the Texas Latino vote in '04.

And there's always the possibility -- slim as it may be -- of the party exorcising itself and transforming into a competent, humane and forward thinking option more in-sync with peoples' aspirations instead of their fears.

But actions and words matter. And Republicans of late have been hell bent on scapegoating all of the nation's problems on immigrants -- Latino immigrants in particular. Some of their leading nativist propagandists--Lou Dobbs, Sean Hannity, Ann Coulter, Tom Tancredo, Patrick Buchanan, Michael Savage, and many others--view Latinos in general as a threat.

As a result, Republicans have been steadily losing Latino support. According to Pew, Latino support for the GOP dropped 9% between '04 and '08.

Further dimming their prospects are Republican views on the environment, women's rights, gay rights, labor rights, foreign policy and economics. Harsh conservative views trouble today's younger voters of all stripes -- across the nation as well as in Texas.

Imagine a Texas-less Republican Party. Hard to imagine, right? But nevertheless, likely. Had Texas flipped this year, McCain would have lost by 399 to 137 EVs instead of 365 to 171 trouncing he received. If Texas flips in 2012 or 2016, the damage to the GOP will be even greater if, as expected, 1 or 2 electoral votes are added to its total as per reapportionment.

Barring a catastrophic failure on the part of President Barack Obama and the national Democrats, it's hard to see a scenario whereby Republicans stop Texas from going Blue. They have blown it! Nativism, warmongering and economic incompetence are just not selling points for people looking for brighter futures.