Cubans for Obama: Shifts in the South Florida Latino Vote 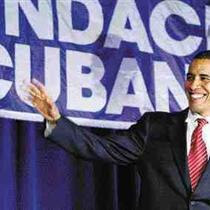 The Republican Cubans' grip on South Florida politics is lessening with each passing day, and Barack Obama may be a beneficiary of this trend next Tuesday.

The larger reason has to do with the region's changing demographics.

Older Cuban exiles are dying off and for the younger, U.S. born Cubans--as well as later refugees--the 'Cold War' framework of these elders is something of a relic of the past.

While most Cuban Americans are strongly anti-Castro and anti-communist, a growing number believe that the 50 year old U.S. policy towards Cuban has failed. Additionally, some question wisdom of prohibiting access and direct support to family members in Cuba; while others are perplexed by the prohibitions against direct support to Cuban pro-Democracy groups and dissidents.

Furthermore, younger South Florida Cuban Americans are more concerned about the economic security and safety of their families here in the U.S. They--like other Americans navigating today's shifting economic and political situation--respond with a healthy diversity of views and personal preferences.

Voters are focusing on what the candidates say about domestic economic and political issues... and not on how the candidates could improve relations with their home country. Jorge Pinon, Cuba expert at the Center for Hemispheric Policy

Another factor in the shifting politics of South Florida is the growing number of non-Cuban Latinos. Americans of Cuban heritage are ferwer than 50% of South Florida Latinos--and are likely to drop to just 25% within a decade. Newer arrivals from Puerto Rico, Mexico, Venezuela, Colombia and the Dominican Republic are diluting the Cuban conservative political influence. Moreover, these new residents are reframing the political conversation and views of the South Florida Latino community.

Related:
Florida Latino Profile
Cubans for Obama
Cuban for Obama
at 10:23 AM